Please do not get too attached, this page is about to get moved permanently to etna.ens.fr/projets/geocube/

Our ambition is to develop an array of light and rugged multi-parameter stations organized around the orignal concept of Geocube. This is compliant with the EMEWS concept (European Mobile Early Warning System).

The project gathers scientists from the Istituto Nazionale di Geofisica e Vulcanologia, Osservatorio Etneo, Italy, and from the Centre National de la Recherche Scientifique, the Institut National de l’Information Géographique et Forestière, and the Ophelia Sensors SME (originally Kylia SME), France. We are a from both the solid Earth and atmospheric sciences.

This project is based on the expertise acquired buy our team in previous instrumental projects at Etna, and elsewhere. It is also coordinated, for the plume related aspects, with the european working group MIST.

Download here our project submitted to the 3rd ENVI+ call for multi-domain access to environmental research infrastuctures, for implementation during the year 2018.

Dowload here the report of the mission of July 2018.

The 2018 campaign was aimed to re-observing the five Geocubes sites where the Geocube prototypes were deployed originally in 2016-2017, and provide the last set of data needed by Amjad Lasri to complete his PhD defended on December 12, 2018 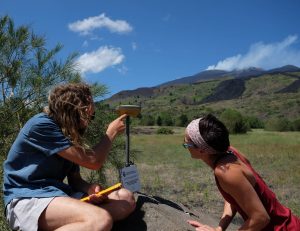 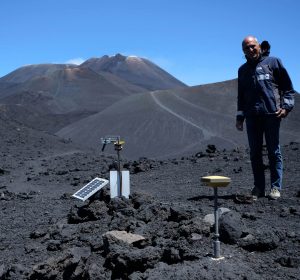 Francesco Guglielmino (INGV Catania) at the station “Géocube miracolato”, elavation 2650 m, on July 6, 2018. In the back the south east summit crater of Etna 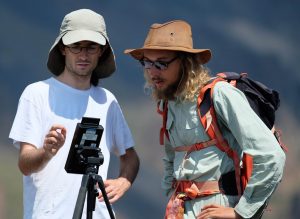 Luca Terray and Simon Bufféral performing analysis of the aerosols in the volcanic plume by using a Microtops II sur radiometer at the station Schiena del’Asino, elevation 2100m, on July 12, 2018 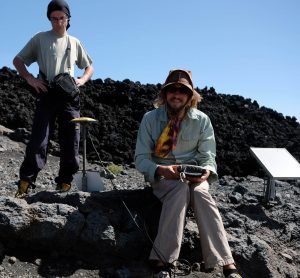 Luca Terray (left) and Simon Bufféral (right) at the station “Géocube miracolato”, elevation 2650 m, on July 6, 2018. On the right the solar panel.